Retrospection on the retrospective

I was recently asked, "What are the top ten retrospectives?"

I didn't and I still don't have an answer, however in the blog below I explore a few options and hopefully give some ideas depending on what you are looking for and where you are with your teams.

While thinking on this question, I remembered something a colleague said in a retrospective,

The format of a retrospective is (mostly) irrelevant, it’s the conversation and discussion that is generated as a team that matters.

But sometimes you want to try and help people think differently or open up the  discussion, and by thinking ahead and playing with the format you can influence the energy, participation and collaboration of the team. So yes, the format may not matter, however the format can also influence the discussion and how the conversations flows.

We will get back to the question at the start of this blog later on, however first let’s set the scene and look at what a retrospective is and why agile promotes reflection and retrospection.

What is a retrospective?

It’s not just an agile thing. A weekly meet as a team or a quarterly get together are unlikely to do any harm, likely they will do some or much good, even if that is a sense of belonging and togetherness as a team.

Most of us have probably by now been in a retrospective. At a base level, it’s a time for the team to get together and reflect on how they are doing as a team and what they could do to improve.

How do we improve if we don’t look back … and I would argue look forward too. Where do we want to go as a team, and how will we get there? Maybe we should do more looking ahead as well as looking back.

Why are retrospectives important?

In the agile manifesto there is the following principle,

At regular intervals, the team reflects on how to become more effective, then tunes and adjusts its behaviour accordingly.

Regular is deliberately open ended, however it doesn’t have to mean every two weeks. Why would you wait two weeks to raise something that could be slowing us down? Many of our teams now bake in retrospective moments during the sprint, often at the end of their stand ups for example.

Reflection is looking at ourselves and our teams and being open and honest with how we are doing. The typical retrospective questions are framing questions which encourage a conversation with the team.

As agile teams we should be aware of the quest for continuous improvement. We don’t want to be having the same conversations each and every sprint. In fact, if we are then something is wrong.

We want or should want to adapt, to experiment, to have the freedom to try things, keep that which works and abandon that which does not. It is important that we can change and try things which could help us to improve. It is also important that when we see improvements that we celebrate it, and if we don't that we learn from it.

As people and teams, we should want to grow. Having retrospective moments give us an opportunity to review, reflect, to take a pause and to think.

There are hundreds of retrospective templates available online or you can create your own, however most of them follow a pattern by numbers, where you have pre defined containers and people put the cards in the relevant container to discuss as a team. To illustrate the point:

Ones: one word to describe how you are feeling, a creation to describe last sprint (we've seen Lego creations for example), the Speedboat / Sailboat exercise with just the anchor to describe what is holding us back 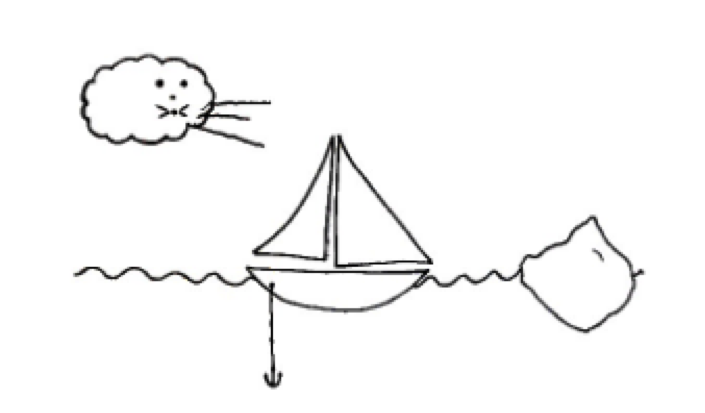 Twos: Sailboat so there are two variables now, the sail to show how we are moving forward and the anchor

Threes: Start, Stop, Continue or variants thereof such as the Small Starfish (more of, less of, keep doing), the 3 L’s (liked, learned, lacked), Sailboat with added environment factors such as the wind, rocks or sharks 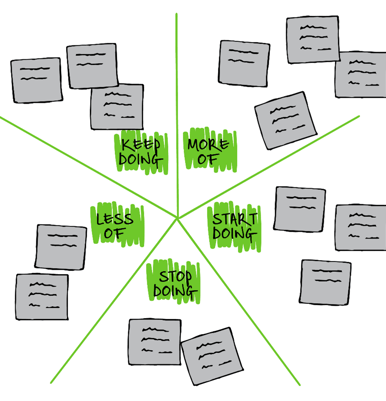 Any more than five containers is probably too many!

Back to the question

What are the top ten retros? An impossible one to answer, and open to debate so I’ll mention a few and hopefully you can throw some into the mix too. I think it’s useful to categorise them, so I have had a go at the same.

Any voting retrospective, where the team members vote on the issues raised and the team discusses those with the highest votes first. Because you are unlikely to cover everything as a large group, at least this way you ensure you have discussed the most important issues. As a note of caution, make sure people don’t abuse the vote.

Have a team bonding session with two truths, one lie or do the constellation exercise where you assert something such as “I like to work alone when working through a problem” and get to know the members of your team better. It’s called constellation because you draw a centre point and have people stand (physically or virtually) where they see themselves relative to the centre which asserts that they strongly agree with the statement.

Alternatively, start out with the standard start / stop / continue format. You could layer that with team mood or feeling for example.

Or, if a very new team, then maybe frame a retrospective around the development stages of a team (forming, storming, norming, performing, adjourning), set your position now and what you could do or need to do to move to the next level. Review that each quarter perhaps.

For teams looking for something new

Pick something topical and be creative, example what is your work new year's resolution to help with your working life. And have some fun.

For teams thinking about a reset

For teams who have lost their way

Just an open discussion, maybe something on resetting either on principles or values, look to define roles and responsibilities or try and have a bit of fun … do the sailboat retrospective with all the options.

I count ten with a bit of creative licence. Worth noting that I hadn’t seen the 3 or 4 L’s before and I think that could be interesting if you are looking to mix it up and want to better understand how the team members are feeling and what their aspirations are.

A retrospective that is from and for the team and is relevant to the current problems the team faces are likely to be more valuable.

Sometimes people just want a change, get creative and be willing to show others the way. A themed retrospective (I held a few health check retrospectives during lock down for instance, simulating a visit to the doctors) could be all that is needed to bring renewed energy to the event.

If your team are not having any retrospective moments at all, consider for a moment what you may be missing, specifically the communication that having these regularly builds with the team.

Those open and honest conversations build strong bonds and increase the levels of communication within the team. And those lines of communication and relationships will likely come in handy, both in normal and in hard times.

I would advocate having a defined time and space for a retrospective, rather than tagging it on to something else but hey that's just me. Why? Because you are more likely to be focused on reflection if you have the space to think and be creative. I don't think you necessary get that at the end of the stand up for instance where your attention and focus has already switched to the day ahead.

A note of caution

Retrospectives that are great in the moment, however have clearly defined actions which aren’t addressed should raise a red flag 🚩. If your team has regular retrospectives and spend the time coming up with actions, and those actions are not getting done ask yourself some serious questions.

Start the next retrospective going over the old actions, whether they are still relevant and if so whether they are clearly defined as actions; with the task, actor(s) and a date. And if the action is too big, look to break it down.

Hold people accountable for the actions they have committed to addressing as we seek to improve. Be aware of waste; wasting people's time and wasteful meetings which is what you will likely get if you are not addressing the actions from the meeting. Change that dynamic as quickly as you can.

These are just some of the different ways you can get teams to try to engage or re-engage with retrospectives. As we said right at the start, it's the conversation and discussion with the team that ultimately matters. But, the time and thought you put into them will have a influence.

I also think that creating space for reflection is important, to build in that moment where you can pause, take a breath, clear your mind and think freely without judgement or bias.

If you have retrospectives or retrospective moments with your team, and you have some clear actions, and you are addressing them in a timely fashion then I expect that you are improving, learning and growing as a team.